The Flame of Truth in Queensland, Australia

Since the brutal Chinese communist policies inside Tibet the situation of Tibetans has worsened. Particularly since 2008 the situation was so desperate that many Tibetans set themselves on fire in search of basic human rights. In Solidiarity with the Tibetans inside Tibet the Centranl Tibetan Administration or the Tibetan Parliament-in-Exile launched the worldwide Flame of Truth Relay on 6 July 2012.

The flame arrived at the Brisbane airport on Monday 24th September from Hobart, Tasmania, accompanied by the president of the Tasmanian Community Tenzin Sangmo. There were around twenty people including Tibetans and supporters gathered to receive the flame at the airport.

Some of our dedicated community members collected signatures from the general public. The signatures will be  submited to the United  Nation Organisation. We thank to all the people who have signed and shown their support for the Tibet issue. 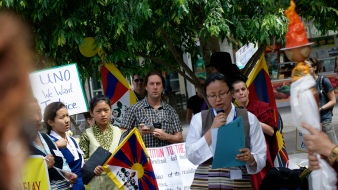 On Saturday 29th September around 80 people met at Reddacliffe Place, Brisbane city, Queensland at around 10 am in the morning. TCQ treasurer, Lobsang Dolma, made a short speech welcoming Geshe Jamyang (from Chenrezig Institute), who was the flame bearer, and all the supporters joining in on the walk.

The walk, which took approximately an hour and fifteen minutes, passed   through the main streets of Brisbane city and into Fortitude Valley where we marched past China Town and the main Brunswick St Mall, and past the crowded Saturday Valley Markets. The walk down Brunswick St to New Farm Park led us to our final destination of New Farm Park where the crowds gathered for a local soccer event and weddings saw the beautiful sight of Tibetan national flags flying and bright easy to read signs with messages alerting people to reasons for the Flame of Truth march.

As the participants walked to the gathering point in the park, a few supporters who could not make the walk greeted them with applause as they walked past them and it was a lovely way to end the walk. The participants sat in the shade to rest for a few minutes. The Queensland Green senator Larissa Waters arrived and the official program began. All the participants sang the Tibetan National anthem and recited the Word of Truth prayer in Tibetan.

Lesley Dimmock, Convener of the QLD branch of the ATC, opened the official speeches and invited Lobsang Dolma to speak.

ft to thank Larrissa Waters for her long time support for the Tibet cause. She shared her stories of recent visit to Dharmsala and all the people she met and places she visited. The Australian Greens have always been strong supporters of the Tibet cause. Larissa encouraged the participants to continue putting pressure on all political parties to ensure Tibet is not forgotten by politicians. She also thanked the Tibetan community, ATC and all the Tibet supporters for the on going work and

support they have given to the Tibetan cause and gratefully accepted the Katha and the gift.

Larissa and her family joined us for a community barbeque put on by the Tibetan community and it was a lovely way to end the day.

The following day on Sunday 30th September, TCQ member Lobsang Tenzin accompanied the flame to Adelaide, South Australia for the next leg of the FOT journey.

Save Tibet
View all posts by qtibetan »

Posted on November 7, 2012, in News. Bookmark the permalink. Leave a comment.